Innovation is at the heart of the vape industry. But while new ideas continue to propel the industry forward, some older concepts are worth revisiting with a fresh perspective and expertise. Enter Z FUEL.

Z FUEL is a supercharged short-fill range from the makers of the world-renowned ZAP! Juice and AISU e-liquids. The name should give you some idea of the USP.

“The current trend is CBD and we didn’t want to go down that route because everybody else is doing it. We wanted to do something different.

“So we decided to go with caffeine due to the fact that it’s not been done in about five years.”

The TPD made it a lot harder for juice companies to experiment with different additives. But the guys got the green light and a letter of approval from Trading Standards and were good to go.

There’s only so much Lewis can say about the effect of vaping caffeine. But to give you an idea, an average cup of coffee contains about 85 milligrams of caffeine. A bottle of Z FUEL contains 300.

“We took it to Korea. The Korean market is different because they allow nicotine to be premixed. There aren’t many short-fills out there so we pre-mixed 3 and 9mg with the caffeine and sold practically half our stock out in Korea.

“I’ve actually got a bottle of the Korean version of Pink Punch in my car as the energy drink is my favourite drink.

“I know I sound biased but I’m really not. I’m constantly on it.” 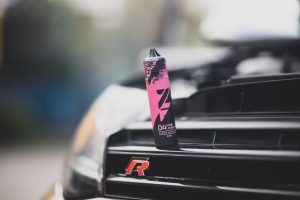 The high caffeine content and branding will be familiar to motorsport fans. The designs draw parallels with brands like Monster, Red Bull and Relentless that are as ubiquitous on the track as they are in the hands of vapers at expos all over the globe.

Lewis hopes that Z FUEL will present an opportunity to bridge the gap between the two industries.

“We are already in talks with a local car club, which is a Volkswagen group.

“We’re in talks to them to sponsor their club and collaborate with their stands at the club meets and organised car events.

“Apparently, in that car world, it’s a ‘mine’s bigger than yours’ philosophy. The bigger your stand looks, the more money your club looks like it’s got”

His ambition doesn’t end there. Lewis hopes to create collaborative merchandise such as car stickers to help promote the brand as if it was a car product or company rather than an e-liquid, opening up Z FUEL to a new audience while encouraging drivers and Z FUEL enthusiasts to follow one another.

“On top of the car venture we’re hopefully going to get a car wrapped for a show car. It would more likely be a van, like a VW Caddy.

“If it’s modified and wrapped in the 03: Citron Freeze design, it’s more eyes on the brand in a very different way.” 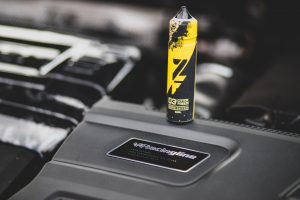 As well as being a keen car enthusiast, Lewis is well-versed in the world of competitive gaming. This, too, is a relatively untapped market for e-liquid brands.

Along with educational videos about the liquids, Lewis hopes to get in on the live streaming act. Z FUEL Gaming will further reinforce the innovative brand’s links to high-octane competition.

“The whole Z FUEL branding is based around fast-paced, high energy. You put fuel in your body. You put diesel in car, you drink an energy drink before doing a backflip on a BMX. On a daily basis in some shape or form you are using a fuel.

Interested in learning more about innovative vaping products and technology? Browse through some of our other vape technology articles.